An Xtended weekend in Pondicherry

Pondicherry was on my cards ever since I settled down south here in Karaikudi. It was about 300km away but one year went by and it was still in the bucket list.

September 2016. A three day long weekend on Ganesh Chaturthi - I finally convinced myself for the trip. 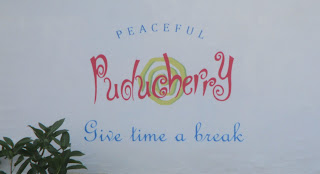 2nd September 2016. Friday. I boarded the Cape-Pondicherry Express from Karaikudi Junction at 7:40 pm. I had a waiting-list ticket which luckily had got confirmed to sleeper class (SL)  upper berth.

Day-1. 3rd September 2016. Saturday.  Woke up at around 4:10am. The train was at halt at Villupuram Jn. Here the locomotive reverses its direction to pull away from the main route to Pondicherry. It was pitch dark but the Indian Railway vendors were already into business with their tea-coffee.

An hour more and the train finally pulled into Puducherry station. I made out of the station and headed to Rock Beach. As I walked the 700m distance I could hear the loud roaring of the waves and then the pitch dark Bay of Bengal lay before me. The Goubert Avenue runs along the rock beach. No vehicles are allowed from dusk to dawn leaving it solely for pedestrians.  The beach was pretty filled with early risers. I found a place to settle down at least till it's time for the guest houses to open.


The view that started unfolding before me was something like straight out of a poem by Robert Frost or John Keats. Cool breeze were hitting me. The black sea slowly started turning blue as if an alchemy had been done. A few boats were in the sea and far in the horizon a patch of orange hue. Slowly it started to become brighter; filling the entire place with its vibrant energy. From Orange to yellow it turned and the sky was clear blue. It took just a bit more than 2 minutes to declare it's morning.

I took a walk to the famous Pondicherry bridge. Must it had been open one could take a walk far into the sea. But unfortunately it has been closed for tourist.

I recharged my self with a cup of ginger tea and started my hunt for accommodation. The YHAI hostel was full for the extended weekend while the New Ashram guest house don't provide dormitory to one person. However I was able to locate another dormitory at a walking distance from the sea.

My first destination of the day was the tourist information centre on Goubert Avenue. The lady here generously explained me about the layout of the city, the places to visit and mode of transportation.

I decided to start my exploration by visiting the experimental town of Auroville, located about 14km North of the main city. I boarded a bus that runs along the East Coast road and disembarked at Auroville bus stop. From here  I had to continue in an auto to the visitor centre. Auroville is said to be an experimental town based on the principle of brotherhood. At the inauguration ceremony on 28th February 1968 representative of 124 countries and 23 Indian states placed a handful of earth from their homelands in a lotus shaped urn at the centre of the future township, in a symbolic gesture of humanity. From being a barren plateau of largely red earth back then, Auroville has been transformed into a lush green landscape in which a city is progressively beginning to take shape, radiating out from its centre, the Matrimandir. Matrimandir is not a 'tourist' site; it is a place for individual silent concentration.

Visiting inside the Matrimandir requires pass to be obtained in advance from the visitors centre. However a daily pass is issued to view the structure from a viewpoint.

By the time I left Auroville, it was late afternoon. A friend joined me and on his advice we headed to Rue Dupuy for a delicious full course Bengali lunch complete with fish and sweets. The rest of the evening was spent lazing around the Rock beach.

Day-2. 4 September 2016. Sunday. While scanning articles on Pondicherry I happened to get my hand on a map from INTACH about Heritage walks in Pondicherry. My day two was reserved to follow the trail and discover the city. I started at Notre Dame des Anges Church located near the Rock beach and passed through several other buildings like Alliance Française, Chamber of Commerce, Assembly, Manakkula Vinayaga Temple, Sri Aurobindo Ashram, museum, French Consulate and a few others. This trail covers the part of the town popularly called the White Town. It was/is this part where most French style buildings can be found. You can find the tail map here. It is advisable to start the walk early to avoid the mid-day sun. It takes around two-three hours to complete the trail.

After completing the trail I headed to Auro Beach. This is a fisherman beach with lots of stationed boats and a few stalls selling fresh fried fishes. This tides at this sandy beach is much calm and ideal for getting wet.


Pondy Photo 2016 - a photography exhibition was being held during the time I was visiting. The exhibition had displays all over the town in art galleries, road side walls and the main festival venue the old port of Pondicherry. The theme of the year's exhibition was water. The dilapidated buildings of the old port area were turned into a perfect setting for displaying photographs and installations.

To see more pics from the exhibition click here.

Free advice: Sunday in Pondy is a good day for street shopping.

Day-3. 5 September 2016. Monday. Final day. My plan was to spend the day at Paradise beach about  7km outside from the city centre and then take a train back to Karaikudi. Paradise beach is private beach and has strict controlled access. The beach is accessible via boats from Chunnambar Resort on Pondy-Cuddalore Road.  As I reached the place I was told hat the beach was closed for maintainance.

With no intention to go back to the city I headed to Chidambaram with the aim to visit the famous Nataraja Temple. This is one of the few temple where Lord Shiva is present in his Dancing Avatar. Yet again I was able to reach the temple just a few minuntes after it shut the gates for lunch. The gates would reopen only at 4.00 pm in the evening. With no much time in hand I decided to visit it another time. I headed to the bus stop to board a bus to Trichy from where I would be able to continue to Karaikudi. My bus to Trichy decided not to go further than Kumbakonam and I had to get another bus to Trichy.

From Pondicherry to Karaikudi I had to change four buses travelling a much longer route than usual. A day that was planned to be in Paradise turned to be a day of bussing across Tamil Nadu. I reached Karaikudi at around 11.00 pm.